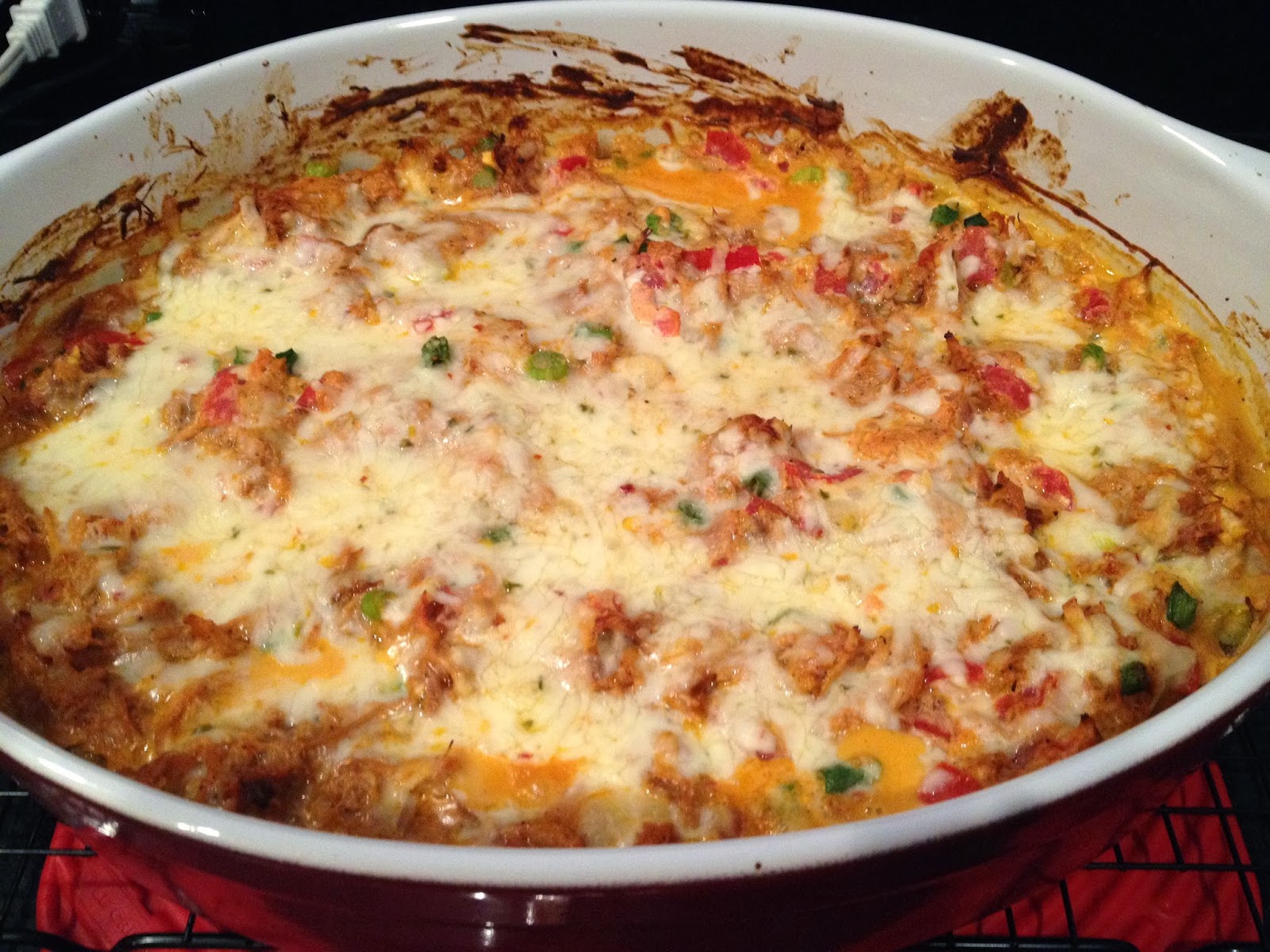 Every year, I attend a Super Bowl party where the hosts ask people to bring food representative of the cities of the teams playing and the host city.   Denver, Seattle, and New York were on deck this year.  I’ve heard Denver has good Mexican food (I will have to find out for myself sometime), so I went with this Enchilada Dip that I had seen online.  Of course I made plenty of tweaks to make it my own. 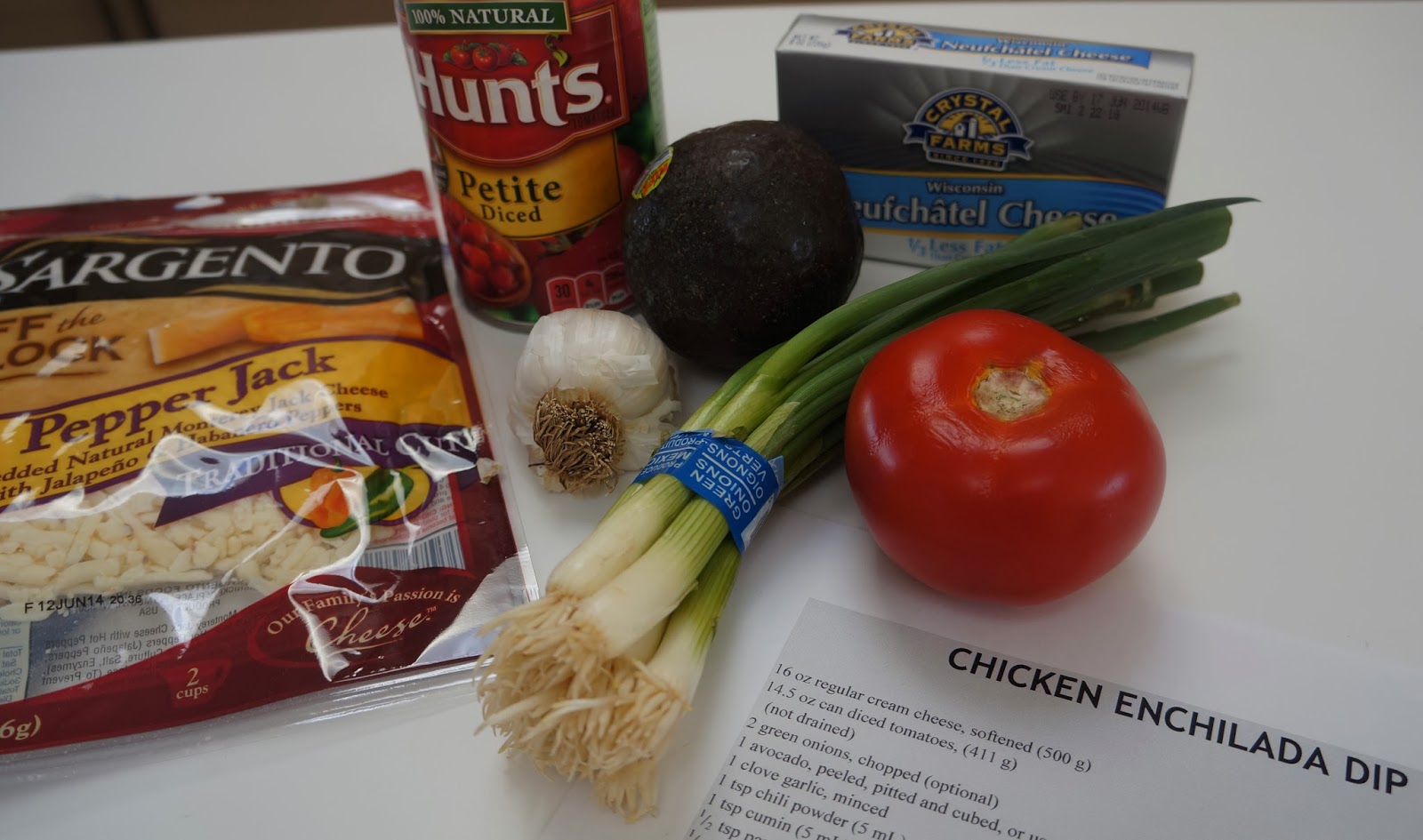 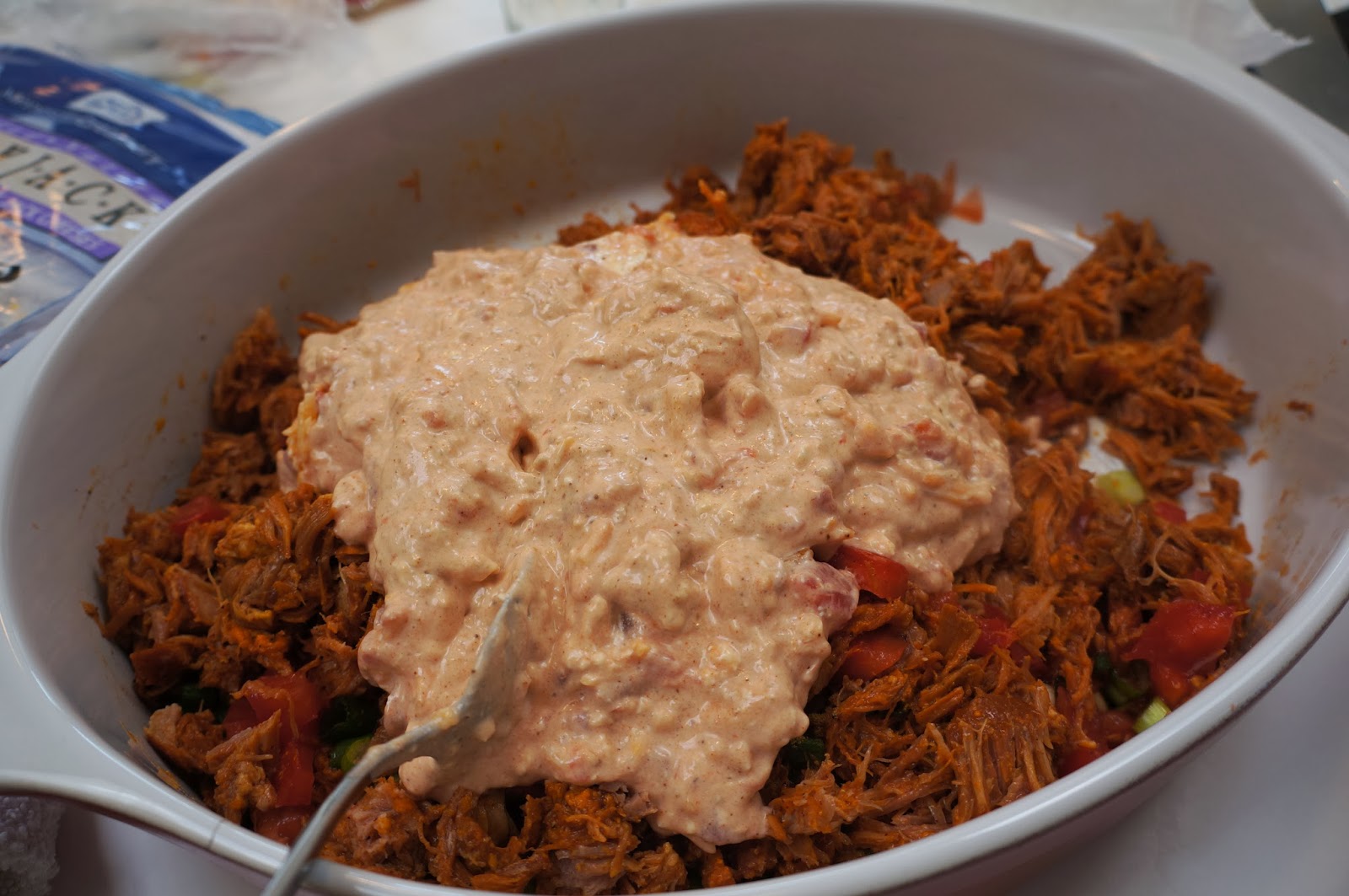 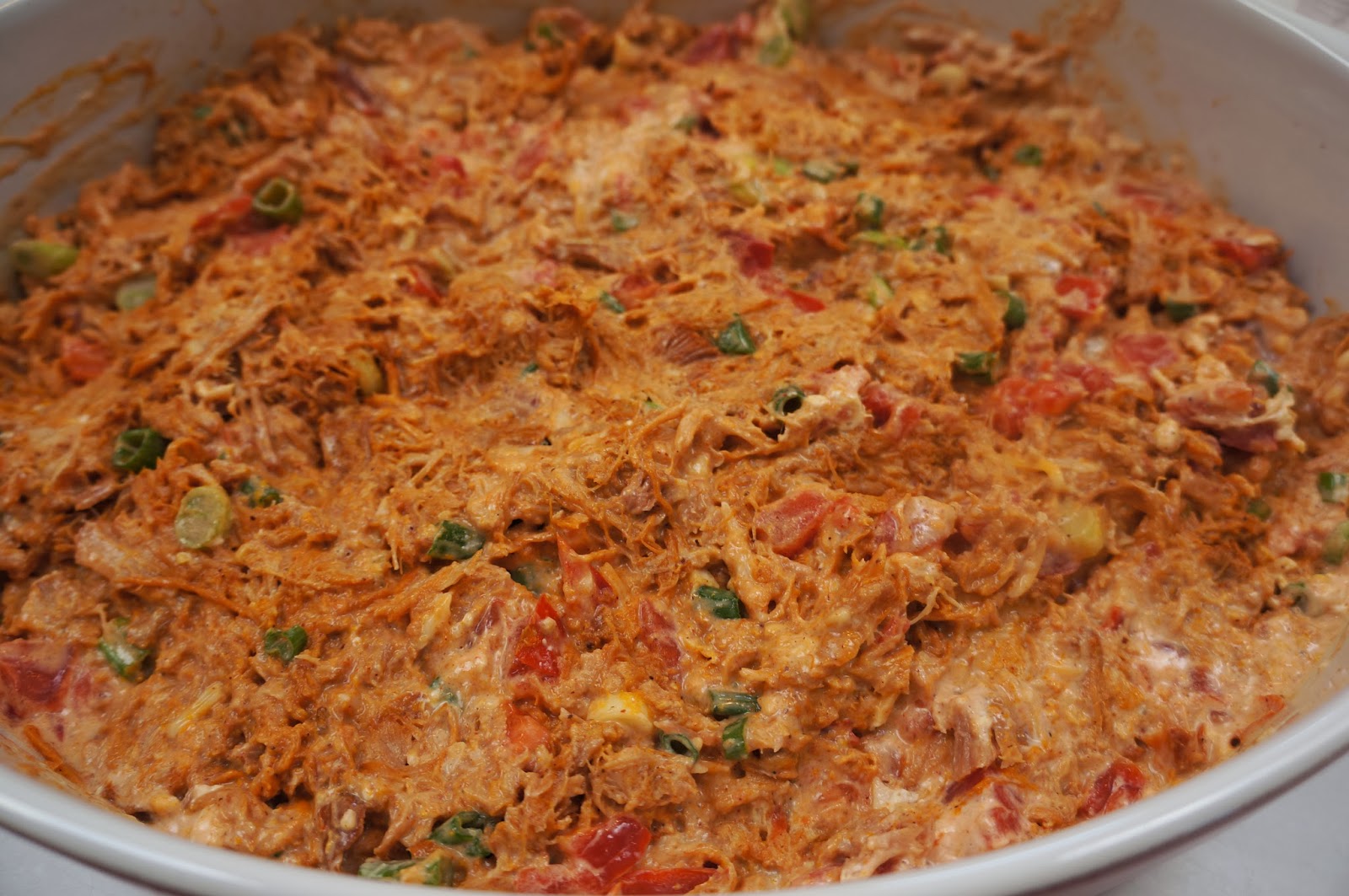 Place in a pretty, large 2-quart (2 L) capacity oval dish or use a 9 x 13-inch (2 L) casserole dish.  Sprinkle with remaining Cheddar cheese.  Bake 20 minutes, or until cheese is melted and mixture is bubbly.  Serve with sliced cucumbers, sliced jicama, or low-carb crackers.

Avocado added last (after baking).   Cooking the avocado in the dip sounded strange to me, so I added it on top after I took it out of the oven.   There was also sour cream nearby as a chili topping so I dolloped that on top (yes, dolloped is a word).   I think next time, I would put a bowl of guacamole, sour cream, and fresh jalapeno slices out as topping options. 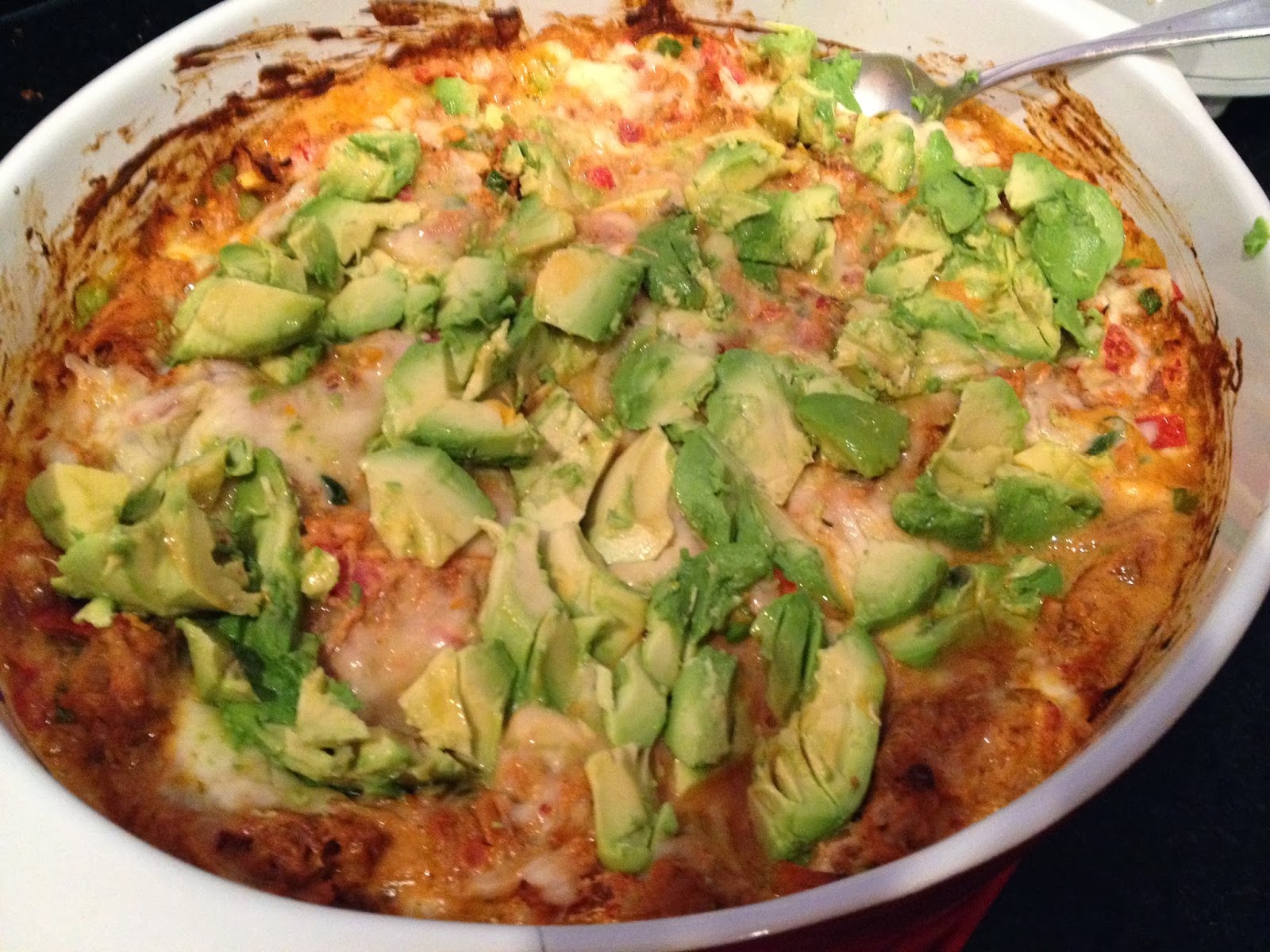 Serve with Tortilla Chips (or Fritos).  The recipe above was mentioning that is “slow-carb” (hence the suggested cucumber and low-carb crackers for dipping).   Well, if you are going to have an enchilada dip, then you might as well go all out with the tortilla chips.   I served mine with tortilla chips but I was wishing I had grabbed a bag of Fritos as well as I think that would’ve been really good too. 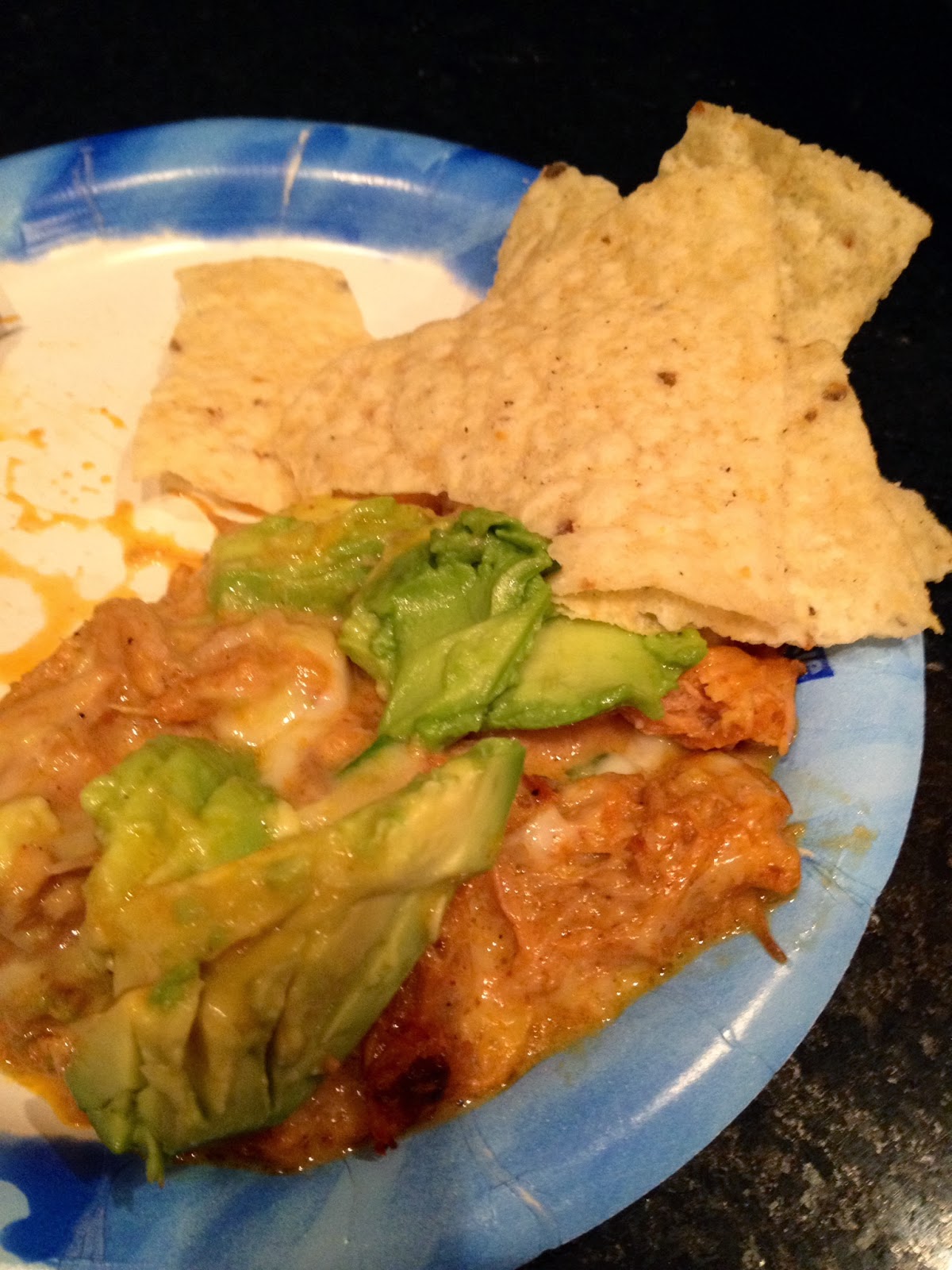 Pepper Jack Cheese instead.  I used pepper jack cheese instead of cheddar.  I like both cheeses.  Heck, I love all cheese.   But as Tara at the party mentioned “I’m not afraid of a little spice.”  (As an FYI - Most Minnesotans tend to think black pepper is too spicy.)  I also love Monterrey Jack cheese in Mexican food, so there you have it.   I was happy with my choice.  I mixed most of it in the dip and then piled a layer on top too. Cuz you can never have too much cheese. 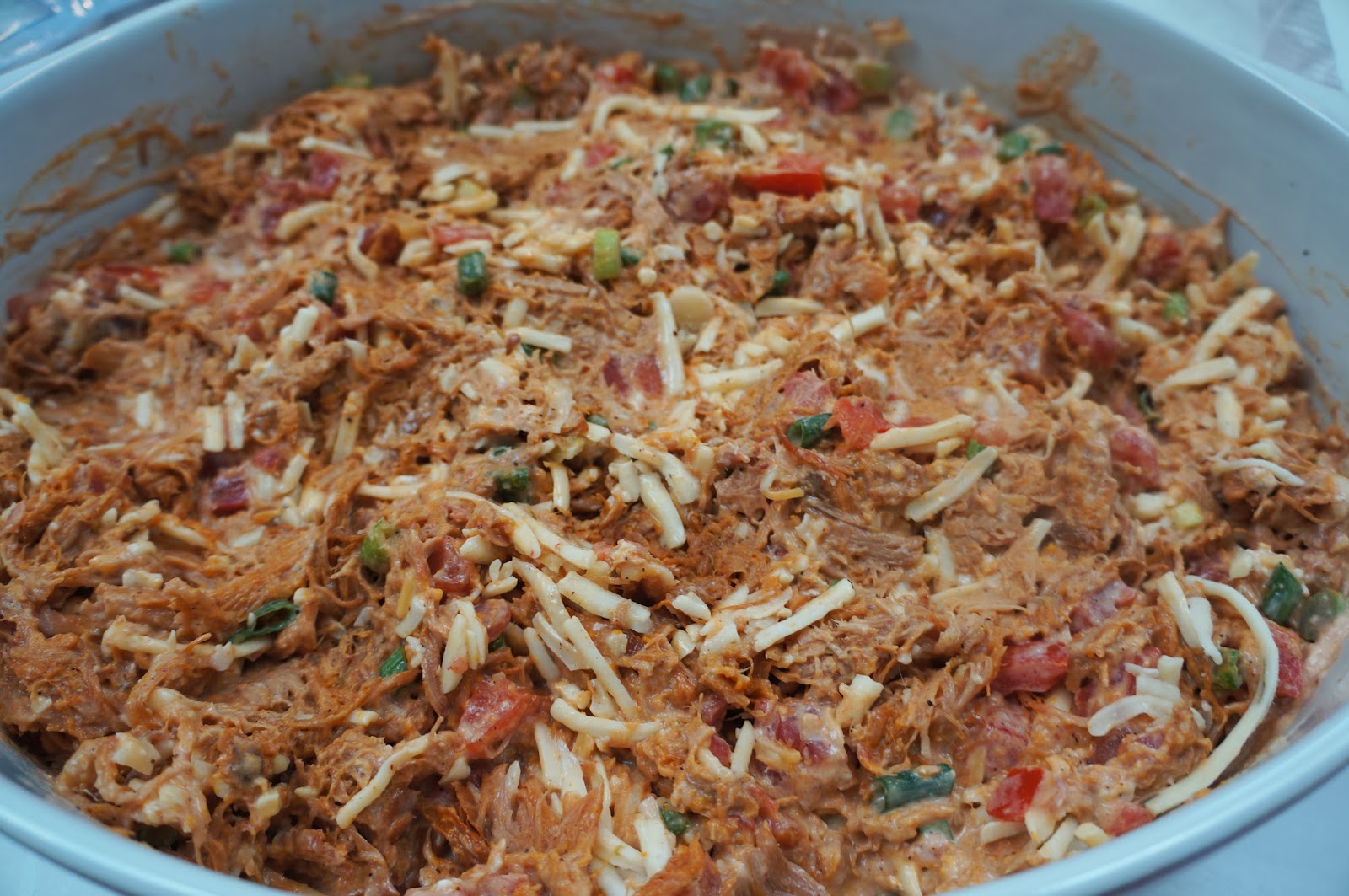 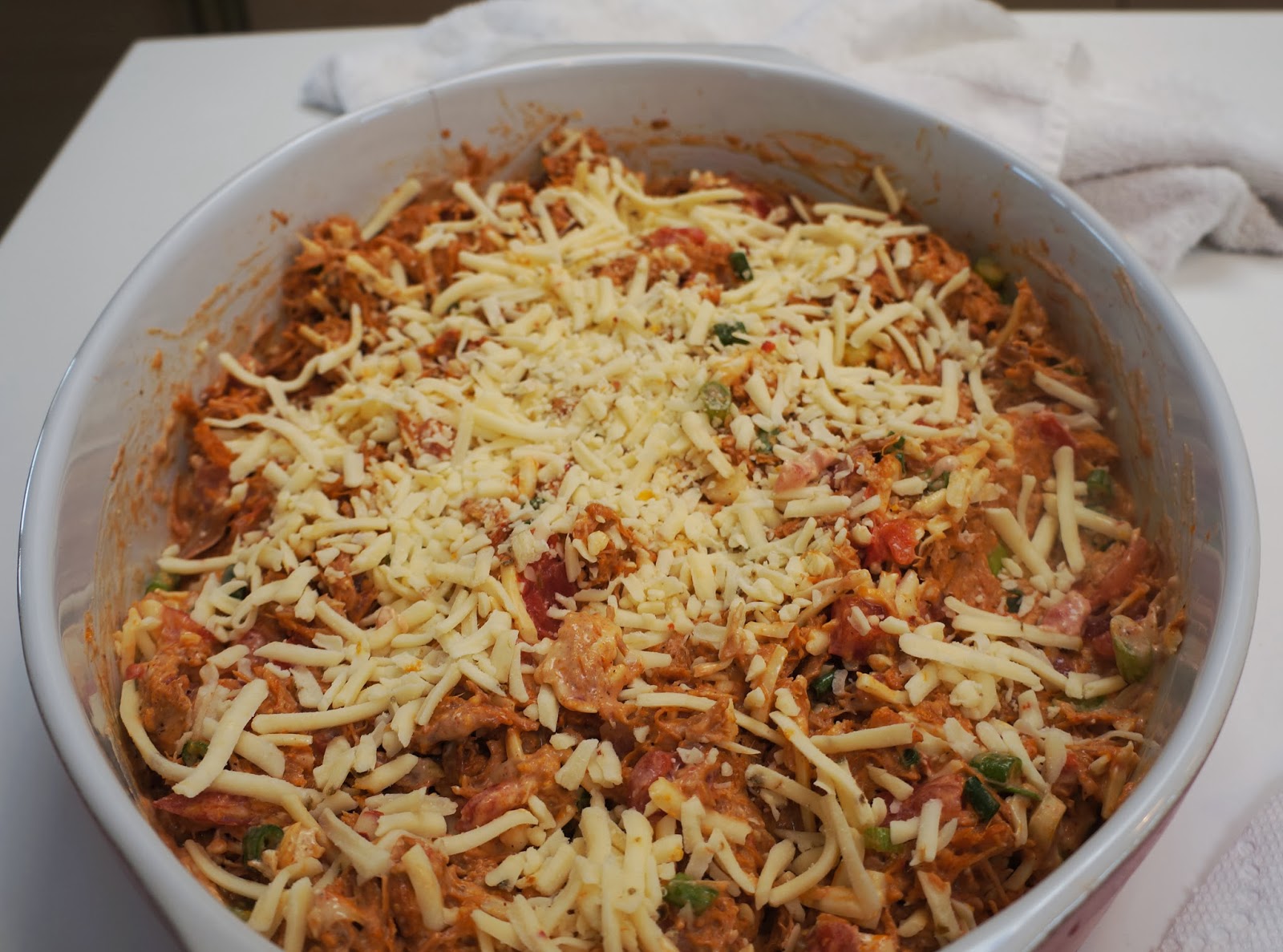 Spices.  I didn’t have all of the spices so I just threw in what I had.  Okay, I had all of the spices except onion salt; and I had oregano but I didn’t think that sounded very “Mexican” so I left it out.   And I wasn’t paying attention because while most spice jars have small holes in them, the cumin did not and I accidentally dumped the whole bottle in.  (Lesson learned:  pay attention!).   It wasn’t a full jar, and I like Cumin, so I just stirred it in really well and went on my merry way.

Fresh Tomato.  I had a fresh tomato sitting on my counter so I chopped that and threw it in along with the can of diced tomatoes.

You’ve probably noticed by now that I am the Queen of only using recipes as a guide, I rarely follow a recipe exactly.  (Except in baking, that is one area that you really have to pay attention to the correct measurements and ingredients or you end up with a limp cake or something.)   I hope you are learning that recipes are meant for tweaking; you can add things, and take away things, at your leisure.   Play away!

Verdict:
I would definitely make this again.

Cheers!
Posted by Penelope Austin at 10:03 AM