I attended the “First Annual Minneapolis Food Truck Fair” downtown Minneapolis on Sunday along with thousands of other people; a thousand too many.

I bought my ticket on Groupon for $7.00 (half of the general admission price).  I had seriously debated the VIP ticket Groupon was offering for $25.00 but decided “a free slider and free beer samples” wasn’t enough to win me over.   I made a good call.

Sunday was a beautiful day and I was hungry.   I worked out and skipped breakfast in anticipation.  When I arrived with my sister at 12:40, we couldn’t believe the line to get in.   It was insane!   We debated leaving right away and heading to a nearby patio for Bloody Marys.   Instead we found our friends in line.   They were a little closer to the front but not much.  They had VIP and were in a separate line that wasn’t moving at all.

The front of the line was a complete mess.  They had too few people trying to hand out wrist bands and it was completely unorganized.   When we finally got in, we headed straight to the “Get Sauced” food truck.  The line was relatively short and we ordered pork tacos and corn.  The food was great. 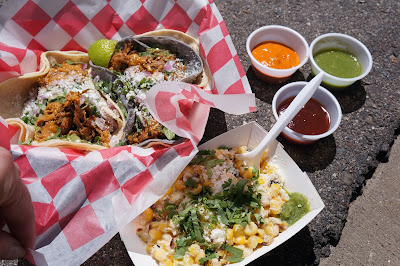 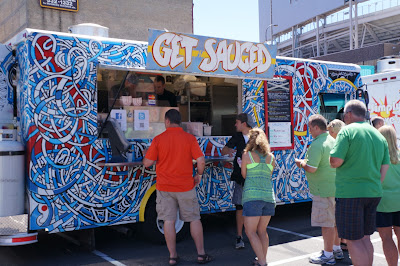 Having to sit on the dirty curb in the hot sun was not great.  The event only had enough tables for about 30 people to sit and the people that had those seats were not giving them up.  They had people holding the seats while other members of their party went on food and beer runs.   Did I mention I was thirsty?  And that they did not have any beverage options other than beer and whiskey and the lines were too long to wait to spend more money in this darn festival.  I was hot, thirsty, and irritated.  By the time we finished our taco the food lines were completely insane.   Waiting for food and beverages for hours was not appealing so we left.   It was a complete waste of time and money.  I am mad about my $7.00 but am happy that I didn’t go the VIP route.  Had I not pre-paid, there is no way I would’ve waited in line to pay to get in there.  It was ridiculous.   I feel bad for those that came in from out of town for this and didn't have the foresight to bail at the sight of the line.

I am not sure who planned the event but clearly they were amateurs.    They completely oversold the event and executed it poorly.    Here are some things that they need to do IF they try again.
Honestly though, even if they do implement some of the suggestions above, I'm not sure I'd give them a second chance.  The whole thing really left a bad taste in my mouth.   AND.... I can hit these food trucks around town without paying an admission fee.   The whole idea of it is asinine if there are no benefits to make the admission fee worthwhile.

OK, I’ve spent enough energy on this event.  If you want to know how everyone else felt (hint – I am not alone in my opinion), check out these links.

They got lots of negative feedback/comments on their facebook page: http://www.facebook.com/MnFoodTruckFair

On a positive note, what is your favorite food truck (in Minneapolis or elsewhere)?

In Minneapolis.....I really liked the Get Sauced truck, I love the lobster rolls a Smack Shack, the fish & chips at Anchor Fish & Chips are really good, and I really like the mini donuts at Chef Shack (they were at the Food Truck Festival but didn't have the donuts on their menu - which was very disappointing).   Another truck that I can't wait to try is World Street Kitchen.