Last weekend I attended a food bloggers conference in Minneapolis.   I only heard about it a few days before and was super excited to have this event come to our city and that I was free and able to attend.  TECHMunch is the brainchild of Babette Papaj, founder of BakeSpace.com.

* I’m going to go ahead and apologize in advance for my photos.   I was trying to play with my new iPhone and Instagram and didn’t have the best luck.
When I first think back to the event, I think of the food; we were very well fed.  Talk about smart planning on part of the planning committee to feed the food bloggers well as they know food and are sure to talk about it.    We started the morning with fresh pastries, juice, and berries.
Lunch was potato salad, grilled chicken, and corn on the cob (the corn had me hesitate a little bit as I had visions of meeting new people with corn kernels sticking out of my teeth, but I ignored that when I heard the words “chipotle butter.”)  Lunch was followed by JOIA (a yummy local soda) and brownies with a caramel center that were fabulous. 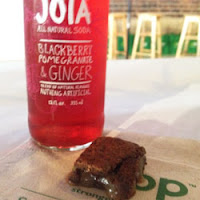 We had about 90 minutes to get hungry again as out came the afternoon sangria and Mediterranean snack. 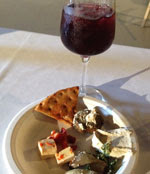 The event wrapped up with an after party at Fulton Beer.  There was beer for sale and food trucks outside.   I bought a “Lonely Blonde” beer and was excited to see the Anchor Fish & Chips truck as I’ve been wanting to check out the restaurant.    It was so good!   I will definitely be seeking them out next time I am craving Fish & Chips. 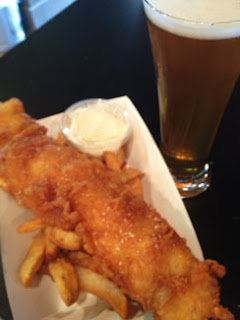 The only problem was I didn’t know that my tour ticket for the 7 p.m. Fulton Beer brewery tour basically involved a lot more more food and beer in the area with the tanks.   Let’s just say I did not leave hungry.
In addition to the food, I loved the space!  The event was held at 514 Studios in the Minneapolis warehouse district.    I was extra happy because they had a garage door that opened, which made being inside on a beautiful summer day much more bearable.
As for the speakers…..  There were seven different sections/speakers.   The event kicked off with Andrew Zimmern (who is now following me on Twitter I might add – very exciting).   He actually lives in the Twin Cities (when he’s not traveling around eating bizarre food) and it was great to hear his story. 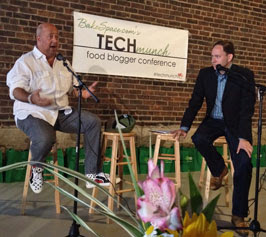 Another presentation that I got a kick out of was the Geek Girls; they were like stand up comedians. And actually this reminds me that one of them started a site on summer dresses that I must check out and post a photo on.   So should you actually (if you do, in fact, wear dresses).  http://www.summerofdresses.com – what a fun idea!
Overall, I had a great time; it was a good use of an entire Sat. (12 hours in fact).  The event definitely met my expectations in that I was certainly inspired and I met a lot of great people.   It was amazing to be surrounded by so many people that are as passionate about food as I am.   I will definitely attend the next one.   And, did I mention I was inspired?   Watch for that inspiration to unfold here over the next couple months…..
Cheers!
Posted by Penelope Austin at 11:47 AM