I ripped out this recipe a couple of weeks ago and decided that it would be a good winter thing to make as grapefruit reminds me of summer and in the winter that is always a good thing. 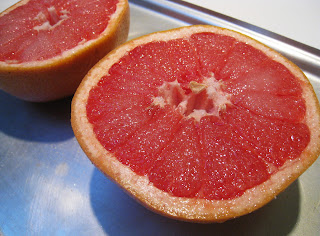 A kitchen torch - Using a culinary torch is the best way to caramelize the sugar into a candy shell, but you can also make this old-school breakfast treat using your broiler. 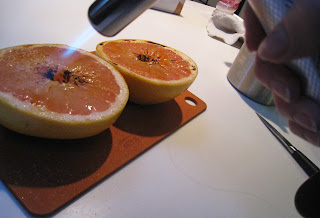 Preparation
Link: http://www.bonappetit.com/recipes/2012/01/grapefruit-brulee#ixzz1jd2AvWvf
My Notes:
Verdict:  I love the idea of this.   However, I think I prefer my grapefruit cold with a sprinkle of Splenda.   The brûlée made it feel more like dessert and less healthy.   That said, I think it is a really cute idea for a brunch if I have company.  I would probably torch the grapefruits ahead of time and then put the grapefruit back in the fridge for at least 30 minutes before serving. 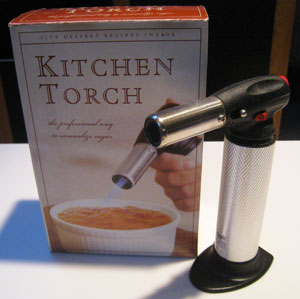 It was fun to get my torch out and use it for something other than crème brûlée.   I might have to find more uses for my blow torch in 2012.  Let me know if you have any ideas.
Cheers!
Posted by Penelope Austin at 5:26 PM