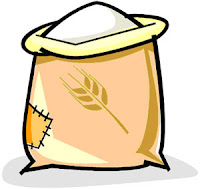 When I was researching different gravy recipes for Thanksgiving a lot of recipes called for cornstarch, and I realized that I have always used a flour roux to thicken sauces and gravy and have never really used cornstarch – I actually don’t even have a box in my cupboard.   So, I decided to do some research to find out the differences between the two.
Here is what I found….
All About Cornstarch
Although flour is the traditional thickening agent in most cooking, cornstarch (also known as corn-flour) is a fine, powdery flour ground from the endosperm, or white heart, of the corn kernel.  As for the difference between cornstarch and flour: both are starches, but cornstarch is pure starch, while flour contains gluten.  The gluten reduces the thickening power of flour, therefore cornstarch has twice the thickening power of flour. Sauces thickened with cornstarch will be clear, rather than opaque.
How to Cook with Cornstarch
Since cornstarch has twice the thickening power of flour, you only need to use half as much.  For example, if recipe calls for 4 tablespoons of flour, use just 2 tablespoons cornstarch.  Cornstarch thickens with a satiny smoothness and glossy appearance.  It adds no taste of its own to mask the flavor of foods.
Recipes thickened with cornstarch have a brighter, more translucent appearance than those thickened with flour. Cornstarch also blends more easily with liquids than flour because it doesn't absorb liquid until it's cooked.  Cooking with cornstarch is easy when you follow a few simple guidelines: 1) gradually stir cold liquids into cornstarch until completely smooth, 2) cook over medium-low heat as cooking over high heat or boiling can cause lumping and thinning, 3) avoid stirring too vigorously because it may break down and thin out, and 4) stir gently during while it thickens, the starch granules will swell to their full capacity in about one minute.
Using Cornstarch as a Thickener
Always mix a slurry of cornstarch and a small amount of cold liquid (water, stock, wine, etc.) until smooth, then add this mixture to the sauce that you want thickened.  Do not mix with liquids that are acidic, such as citrus juice, or its thickening power will be cut in half.
As a rule, use 1 tablespoon of cornstarch to thicken every 2 cups of liquid to a medium consistency.  Cornstarch mixed a little cold liquid, is stirred into the hot food during the final stage of cooking, and it must be cooked to 203°F (95°C) before thickening begins.
Common Problems when using Cornstarch
Cornstarch mixtures that don't thicken at all, or thicken and then thin out during cooling are disappointing. One or more of the following may have caused the problem.
Too Little Liquid: If there is not enough liquid (water, milk, juice) in the mixture, the cornstarch granules will not fully swell and remain thickened when the mixture cools. Adding a little more liquid is likely to solve the problem.
Too Much Sugar: A higher proportion of sugar than liquid (water, milk, juice) in a mixture can interfere with the swelling of the cornstarch granules and prevent thickening during cooking and/or cause thinning during cooling.  Adding more liquid will often solve the problem.
Too Much Fat: An excessively high proportion of fat or egg yolks in a mixture can interfere with the swelling of the cornstarch granules and prevent thickening during cooking and/or cause thinning during cooling. Adding more liquid will usually solve the problem.
Too Much Acid: Acid ingredients such as lemon juice or vinegar will reduce the thickening ability of the starch or prevent the mixture from thickening. Increase the starch level slightly or stir acid ingredients in after cooking.
Too Much Stirring: Excessive or rough stirring with a wire whisk or spoon may break the starch cells and cause the mixture to thin out.
Excessive Cooking: Simmering or boiling a cornstarch thickened mixture for an extended period of time may cause the starch cells to rupture and the mixture to thin.

Freezing: Freezing corn-starch thickened mixtures will rupture the starch cells and cause the mixture to thin out.
Uses for Cornstarch
Cornstarch is often used in Asian recipes because it results in a lighter, clearer sauce with a glossy sheen.  Besides thickening, cornstarch helps to prevent eggs from curdling; which is helpful in making custard, flan, cheesecake, quiche, and other egg dishes.  It also causes heat to be transmitted more evenly throughout the dish, and can be used to make a glaze.  Cornstarch can be used to "flour" pieces of meat for added crispiness when browning.  It is the best choice for thickening dairy-based sauces.
So there you have it.
I’m very curious if you use flour or cornstarch when you make gravy?   Talk to me…..
Speaking of gravy, click here to check out my Champagne Gravy recipe: http://blog.thesparklingqueen.com/2011/11/21/champagne-gravy-2.aspx

Posted by Penelope Austin at 8:52 AM